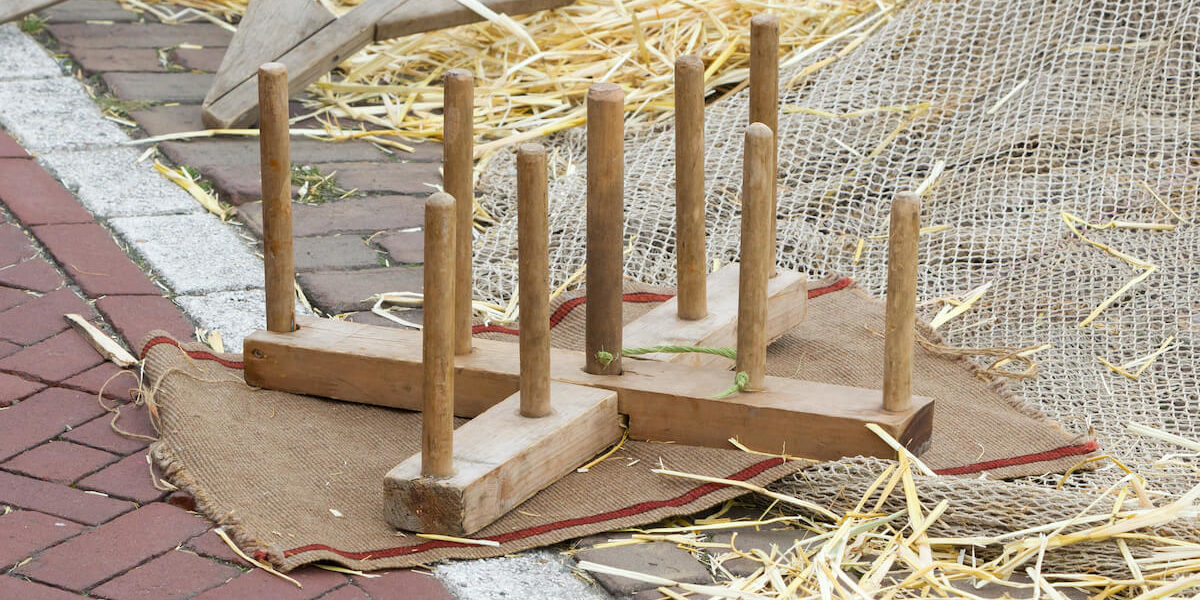 What is Rope Ring Toss

Rope ring toss is one of the most straightforward yard games. It can be played by adults and kids alike, making it an excellent way for families to pass the time.

This rope ring toss game is played much like any other ring toss game. A player’s goal is to toss the rope ring so that it lands around a target post. Each successful toss earns the points associated with the target. Whichever team has the most points at the end of the game wins.

Apart from the portable baseboard ring toss game assembly, you can quickly set the game up by driving pegs into the ground in a similar formation. This version will shift the numerical values from the scoring towers (pegs) to the rings. For example, each ring can represent 3 points.

How to Play Rope Ring Toss

To play this ring toss game, start by setting up the playing area. Put the targets in an open space where you have room to move around. Next, mark a throwing line. This line is where everyone stands to make their toss. The line should be far enough from the posts to make the game challenging without making it impossible to hit the targets.

Next, divide all the players into two equal teams. Try to balance out the teams with people of similar skill. Each team then receives the same number of rope rings.

Each team then takes turns tossing their rope rings from the throwing line. Whichever team accumulates the most points after all the rings are thrown wins the game.

There are some rules to rope ring toss that most players follow. Of course, this is your game, so you can choose to ignore or add rules as your group sees fit.

The first rule is that players cannot cross the throw line when they toss their rope ring. If they do, the toss does not count, and the player must throw again.

The next rule is that the ring must be fully around the post for the points to count. If the rope ring is barely hanging on to the post, points are not awarded.

Finally, if the rope ring knocks over the post, the points do not count.  Even if the rope is entirely around the post, it does not matter because the post was knocked over.

There are as many ring toss variations as you can imagine. It all depends on how you want to play the game. However, ring toss variations are determined by the rules you choose to play by. If teams involve adults and children or rookies and champions, you can change or invent rules that are friendly and supportive to all.

Increasing the distance between the stakes and the throwing line is the easiest but not the only way of customizing ring toss. That said, here are some common rules that define popular ring toss variations.

This option involves two stakes (posts or pegs), with each player or team standing on the opposite side of their stake. The teams take turns throwing their rings at the stakes.

In the two stake scoring variation, you’re free to decide on the highest score. You can also decide the number of points a stake or ring represents. For example, each ring or stake can represent one or three points.

In the five stroke scoring variation, the variation is identical to the baseboard setup, but the stakes at the four corners represent one point while the centre stake is worth three.

Like most ring toss variations, let each team get up to 21 rounds before determining the winner. For fairness, you can switch sides at the eleventh turn.

Ring toss is so flexible. There’s always a way of making it more exciting as there’s of making it pleasantly challenging.

While rope ring toss is a fun and easy yard game, there are a few things you should take into consideration.

Firstly, before you start the game, try giving everyone some time to practice. It takes a few throws to get the feeling of the game. The practice also allows you to move the targets or throw line if they are too difficult.

Secondly, make sure the targets are on flat ground. If they are on unlevel ground, they may tip over too easily. It slows the game down to be continually fixing the targets.

Pull this game when you are hosting a backyard BBQ or on a sunny Saturday afternoon. As your skill level improves, use your imagination to come up with variations to keep the game fresh and exciting.