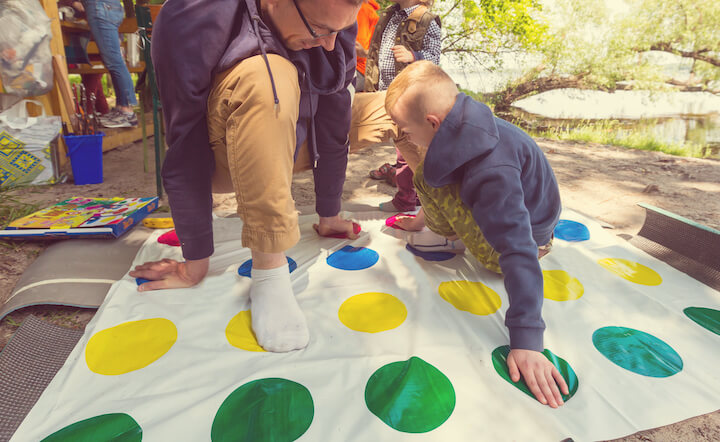 Outdoor Twister: What Is It and What You Need to Know?

What Is Outdoor Twister?

Traditionally, Twister is an indoor game played on a large plastic mat with different colored circles that guide the movements of players. Player gets to use their whole boy in a challenging series of unpredictable instructions that tell them which hand or leg to move. It comes with a spinner that introduces the element of chance and anticipation. When the spinner is spun, players have to move according to the instruction, which at times may not be physically possible.

Twister is always a party favorite drawing many laughter, funny twists and turns for children, teens, and the young at heart. It is an enjoyable game and entertaining for those watching. Outdoor Twister has several variations and names, such as lawn and giant yard Twister.

How to Play Outdoor Twister

To play outdoor Twister, the lawn can be colored with non-toxic paint in the same format as classic Twister, or the number of Twister boards increased to accommodate more people. The markings are laid out in a 4×6 pattern. Each row contains six large circles in the colors green, yellow, blue, and red.

The spinner also has matching colors divided into four segments to cover the left foot and hand and the right foot and hand. Before players begin the game, they must remove their shoes.

Classic Twister variations can also be played in outdoor Twister. You can make the game even twistier, and complex by two different having groups of players take alternating turn to follow the referee’s instructions.

Outdoor Twister can be played as a tournament. You can create two different lawn Twister patches and have teams battle it out until all the members of one are out.

Blindfolded Twister can put an even more exciting spin on an already action-packed game. Players have to find symbols placed on different circles by using their sense of touch to feel the mat.

A player can follow the referee’s instructions in such a way that they move towards an opponent’s side, limiting their opponents another space and options for the followings moves.

Twister is an excellent fun-filled game. Taking it outdoors increases the space and options to so more people can play. You can adjust the layout by increasing the number of circles simply by painting an additional patch of learn lawn.  There is no limit to how many people you can include in around as long as there is space to create more circles. Whole classrooms and groups can actually participate and have fun on the lawn.

A Short Video on How To Play Twister