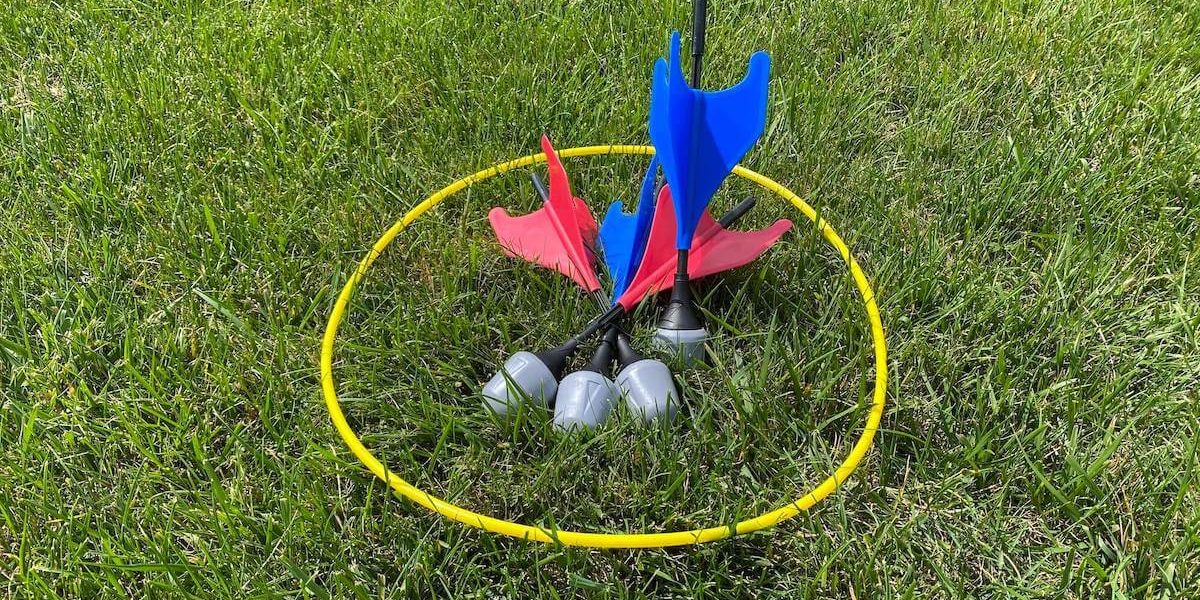 How to Safely Play Lawn Darts

If you’re “of a certain age,” you may fondly remember lawn darts — that backyard family game popular in the 1970s-80s that required players to hurl a foot-long, steel-tipped projectile through the air at a target on the ground.

You may also recall that the game, in its original form, was totally banned in this country by the United States Consumer Product Safety Commission in 1988 because they were so dangerous. While that’s true, lawn darts haven’t exactly gone away: They’ve evolved. There are safer versions of the game now available. Here’s what you need to know:

What Are Lawn Darts’ Rules?

Families have always felt a little free to adjust the rules according to their needs by moving the targets closer or farther away, depending on who is playing. “House rules” and specific instructions that may come with your game aside, however, here’s how to play lawn darts the traditional way:

It sounds simple enough, but getting a good arc on your dart so that it lands where you’re aiming can be tougher than it looks.

What is the lawn darts distance? – Most games are 35 feet apart, but can be closer based on yard size.

How Do You Score Lawn Darts?

Scoring is pretty simple: If a dart lands (mostly) inside the ring, the player or team that threw it gets three points. However, points scored by opposing players or teams in the same round cancel each other out.

For example, if Team One lands two darts inside the circle during a round and Team Two lands one, Team One only gets three points for that round. The other three would be canceled out by Team Two’s dart.

The rounds continue until one side claims 21 points — although players sometimes agree in advance to call it a win when one side has fewer. The important thing is that you agree in advance what the final score should be. After all, this is a friendly competition that’s designed for all ages, so it’s okay to adjust the rules when you want.

It’s hardly surprising that lawn darts are making a comeback (albeit in a less-threatening form). By some estimates, a version of the game has existed since ancient Roman times. If you’re looking for a way to have some fun outside with your family this summer, consider one of the new options for lawn darts and give it a go!

What Kind of Lawn Darts Games Are Available?

BestReviews, which is in the business of providing unvarnished consumer product recommendations, suggests the following options:

Whichever set you choose, you’re sure to have some fun, so pick the one that appeals to you the most.